The New Kid in Town: How Exactly do mRNA Vaccines Work, Anyway?

mRNA vaccines are the latest and greatest, but how do they work? The Rogue Scientist explains them in detail. 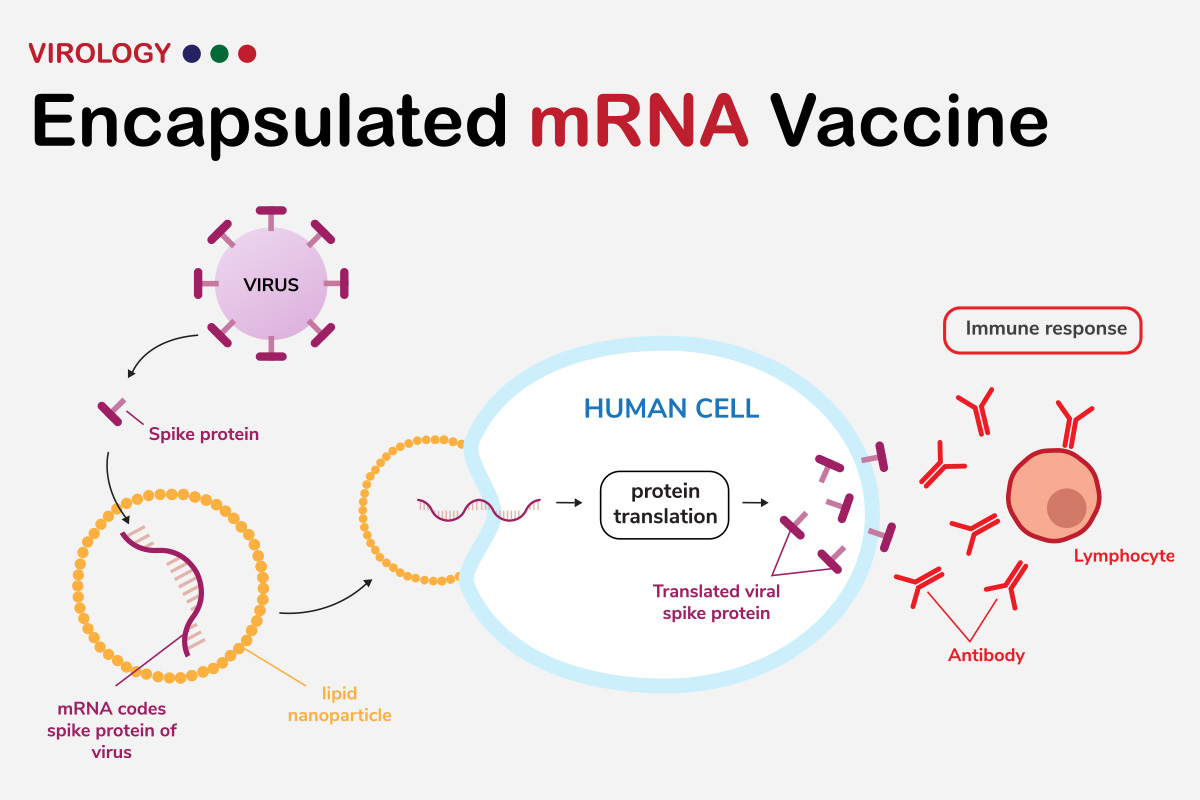 Once SARS-CoV-2 began to make its way around our globe, several companies immediately got to work on developing a vaccine to combat it.

As of this writing, there are three vaccines approved for use in the US: Pfizer, Moderna, and Johnson & Johnson. Johnson & Johnson, a viral vector vaccine, will be discussed in another article.

Today, let’s talk about the Pfizer and Moderna vaccines. Both are mRNA vaccines that work differently than the shots we’re used to.

I remember when we first heard that Pfizer, and then Moderna, would have vaccines available sometime in December of 2020. Despite the fact that it would take a while before the vaccines reached us, it was a message of hope after a long year of difficulty.

To be honest, I didn’t care how the vaccines worked. I cared that they existed, and I trusted science. I trust science because I’ve done science, and the amount of time, effort, and sheer brain power that goes into studying or developing anything is immense.

I belong to a few health-related groups on Facebook, a place where information is shared along with truckloads of misinformation. Some of these misinformed nuggets were about the COVID-19 vaccines, and discussions typically devolved into arguments, mudslinging, and other fun stuff.

The problem was, nobody, whether pro- or anti-vax, seemed to understand how these new vaccines work. Probably because their function requires a decent understanding of genetics and cellular biology.

I decided to BE THE CHANGE. I have the science background to make sense of it all, so I sat down to learn some stuff.

What I learned fascinated me.

Anyway, many of you are wondering how these mRNA vaccines work. How do they differ from other vaccines? What makes them special enough to deploy them now, during a pandemic, instead of doing things the “old way”?

And why mRNA? For that matter, what IS mRNA??

This article will answer each of those questions. But to understand how mRNA vaccines work, you’ll need understand a few other things first.

Your Immune System is a Tiny but Powerful Army

When you’re infected with a pathogen (e.g. virus, bacterium, fungus, etc.), your immune system works to destroy or overcome it. But how?

Each pathogen has structures that are unique to it, called antigens. Your immune system creates an antibody that is uniquely designed to take down that antigen. It does this every time you get sick—a new pathogen with a unique antigen invades, your body creates a new, unique antibody to fight it.

We have thousands of antibodies within us. They’re like our own little soldiers, fighting to keep us alive and healthy.

However, it takes this army of soldiers time to develop antibodies against a new pathogen. This is why a cold, flu, or other infection will knock you down for a while, until your immune system develops enough antibodies to fight the invader.

What’s cool is that if that same antigen ever comes sniffing around again in the future, your immune system will recognize it and already have the tools to take care of it, and can mount a defense much more quickly.

This antigen-antibody relationship is the basis for how vaccines work.

Bottom Line: When a pathogen’s antigens invade your body, your immune system develops custom-made antibodies to fight them.

Vaccines: Preparing Your Body for Battle

If your body produces antibodies to fight off antigens from a pathogen, vaccines seek to supply that antigen in a safe way so you can mount a defense ahead of time. However, there are many ways to do that.

As such, there are many kinds of vaccines, including:

You’re probably most familiar with the first two categories, where the vaccines contain either inactive (killed) or attenuated (weakened) pathogen. Hepatitis A, rabies, flu, and many childhood vaccines fall into these two categories.

But as you can see, there are several other categories of vaccines that don’t involve the pathogen itself.

For example, the third category (subunit, recombinant, polysaccharide, and conjugate vaccines) contain only parts of the pathogen. These “parts” serve as antigens that your immune system will develop antibodies against. Hepatitis B, shingles, and HPV vaccines are good examples.

When was your last tetanus or tetanus-diphtheria vaccine? You need one every ten years. These are toxoid vaccines, which contain no pathogen at all. Instead, they contain toxins from that pathogen, and those become the antigen.

The last two categories include the COVID-19 vaccines we use in the US. Pfizer and Moderna COVID-19 shots are messenger RNA (mRNA) vaccines, and the Johnson & Johnson (as well as Europe’s AstraZeneca vaccine) is a viral vector vaccine that I’ll talk about in a separate article.

Bottom Line: mRNA vaccines are one of many kinds of vaccines.

So let’s focus now on the category of interest for today: mRNA vaccines.

mRNA Vaccines: How Do They Work?

Yes, these vaccines work differently than the others. That’s been a concern for some who fear the technology is too new and the vaccines were rushed to market. Not the case.

You can rest easy knowing that scientists have been studying mRNA vaccine technology for decades, so the idea is far from new. If interested, this Harvard article offers a history of the development of mRNA vaccines.

mRNA vaccines contain no virus (weakened or dead), virus parts, or toxins. Instead, they contain a fragment of mRNA.

So how do they work?

Why do it this way instead of the old way with pathogen, parts, or toxins? There are benefits to this design: they’re powerful, they take less time to manufacture (important during pandemics and also with rapidly mutating viruses), and will eventually be more cost effective.

So, let’s get into the details about how these newfangled vaccines do their job. To understand that, you’ll need to learn some…

In the nucleus of every cell in your body, DNA is used to make RNA (this process is called transcription). RNA is then used to make proteins (known as translation). Proteins make things happen in our bodies, whether we’re a developing child or trying to digest food.

There are many types of RNA. When DNA is transcribed, it makes messenger RNA (mRNA), a molecule that is a complementary “match” to that unique strand of DNA. Then, the mRNA leaves the nucleus of the cell in order to be translated into a protein.

In its most basic form, this how genes work, at least in humans and most other animals and plants.

Viruses are a little different. While some viral genomes are made of DNA, many others are only made of RNA. Coronaviruses are all RNA viruses. So they work more like this:

How does all this apply to the COVID-19 mRNA vaccines? I’ll go step by step:

By now, you’ve seen images of the SARS-CoV-2 vaccine, the one that causes COVID-19. Remember those funny little spikes? Those are proteins, known as “spike proteins,” and are used to invade our cells and make us sick.

Like all proteins, these spike proteins were created from RNA, in this case the virus’s RNA.

However, you can’t just toss the mRNA into people as is…

To protect the new spike protein mRNA, they coat it in lipid (fatty) nanoparticles. Now it’s ready to go to work.

After injection into a human, the wrapped mRNA particles fuse to cells and the mRNA is released into the cell. The body sees them and, as with any mRNA, it undergoes translation into protein. In this case, our bodies make that virus spike protein, but only that protein.

Once its job is done, the introduced mRNA is destroyed by the body.

The newly created spike protein finds its way to the surface of the cell. It’s now an antigen. Your immune system recognizes the spike protein as an antigen, and does what it does best: creates antibodies to combat it.

Then, if you become exposed to the SARS-CoV-2 virus, your body recognizes the virus’s spike protein, has already developed antibodies to fight it, and will begin taking it down, thus taking down the entire virus.

And that, my friends, is how mRNA vaccines work.

Bottom Line: mRNA vaccines are new to most of us, but they’ve been around and studied for decades. Instead of using pathogen or parts of a pathogen as antigen, they provide our bodies the instructions to make our own antigen for our immune system to attack. Do to their inherent benefits, they might be the wave of the future.

If you want to be notified when I publish new articles, sign up for my email list.

Sources and Other Reading

WHO: How vaccines work