When trying to understand food sensitivities, particularly tyramine and histamine sensitivity, it’s important to understand neurotransmitters. Why? Because they cause your symptoms, and it turns our gut microbiota produce them. 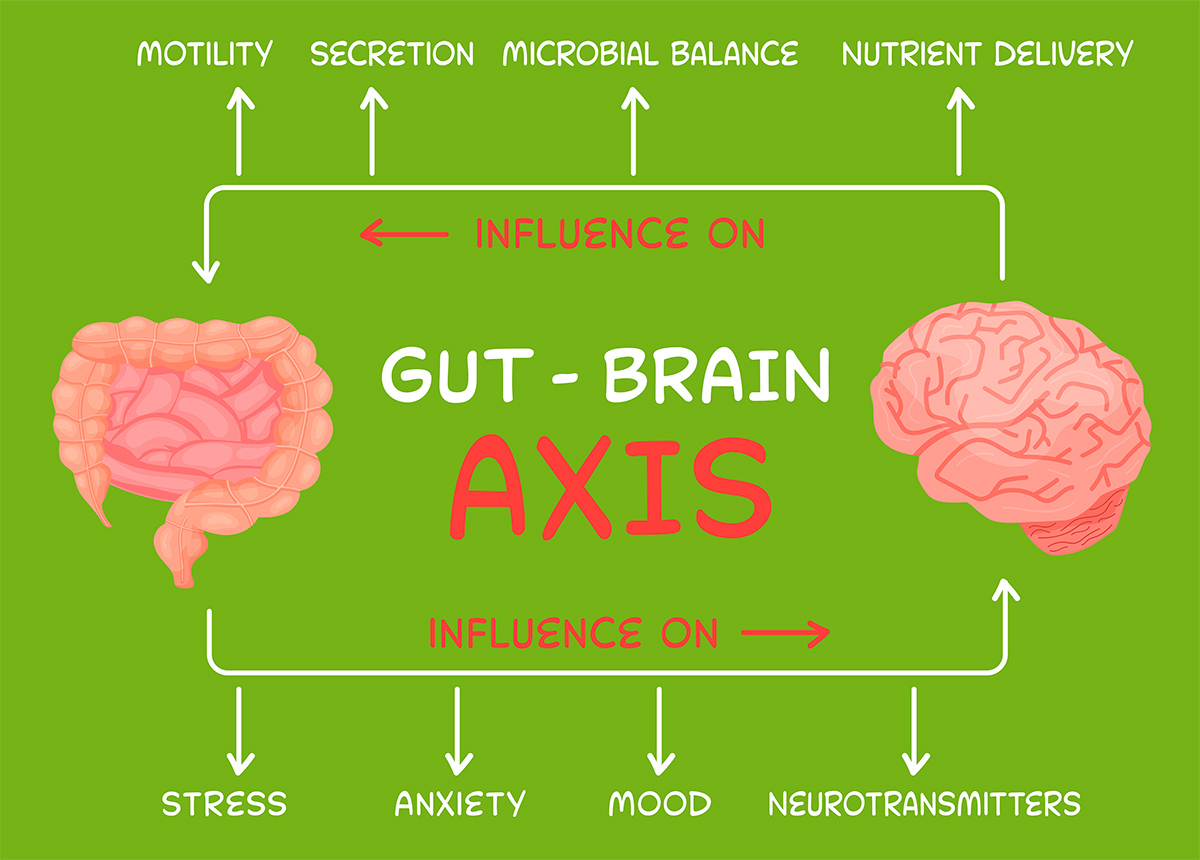 After listening to a long podcast about gut function — and the relationship between the gut and the brain — I learned an interesting fact:

The microorganisms in your gut (also known as microbiota) can both produce and consume neurotransmitters such as dopamine, serotonin, norepinephrine, and GABA.

Why is this important? Several reasons:

What happens in our gut has a significant impact on our health, including mental health. And neurotransmitters influence many functions of the body, from heart rate to mood.

So if gut microbiota can produce and/or break down neurotransmitters and other compounds, that provides one link between our gut and our overall health. The gut plays a role in all kinds of disease, and… we’re finding more and more that it plays a role in food sensitivities as well.

The Gut, Food Sensitivities, and Neurotransmitters

As an example: those of you who are tyramine intolerant, norepinephrine is the neurotransmitter causing your migraines, blood pressure spikes, and bouts of intense anxiety.

Too much tyramine = too much norepinephrine = tyramine flare

For those of you with histamine intolerance, histamine, which also acts as a neurotransmitter at times, is what’s causing you problems.

We tend to associate neurotransmitters with the brain, where they’re very active. And with food sensitivities, we tend to focus on genes and whether the enzymes those genes code for efficiently break down tyramine and histamine.

But if our gut microbiota can make or break down neurotransmitters, including those involved in histamine and tyramine sensitivity (not to mention potentially break down tyramine/histamine themselves), we can’t ignore the possibility that the gut is an important causal factor here. Possibly a crucial one, as I talk about in Part I of this series.

And what about the bacteria in probiotics? Do they contain bacteria species that could produce, say, norepinephrine or histamine?

It turns out the answer is yes.

Gut Bacteria and the Neurotransmitters They Produce

I found a paper entitled “Neurotransmitter Modulation By the Gut Microbiota.”

In the lit review portion of this paper, the authors cite the importance of the gut microbiota for metabolic and immune health, and brain development.

They also mention the gut’s relationship with the nervous system, also known as the “gut-brain axis.” In other words, the gut and nervous system (including the brain) communicate and influence one another.

One way the gut undergoes this communication is through neurotransmitter activity.

Table 1 of this paper lists specific species of microbiota in our guts, categorized by the neurotransmitters they produce: dopamine, serotonin, GABA, norepinephrine, and even histamine.

Here are a few interesting things I noticed:

In Part II of this gut series, I mentioned a spore-based probiotic I took that gave me 4 days of headaches. It contained three Bacillus species: clausii, subtilis, and coagulans.

If you recall my discussion about the 4 neurotransmitters that play a strong role in mental health and mental illness, GABA is your body’s main “inhibitory” or “calm-you-down” neurotransmitter.

If you look at the list of bacteria species that produce GABA in the paper I mentioned above, it’s filled with Bifidobacterium and Lactobacillus species — species that comprise most probiotics that you buy at the store.

Several of those on the GABA list can be found in the GutPro (now Smidge) probiotic I took that worked well for me.

Also, a probiotic sold on Amazon markets itself as helpful for depression/anxiety, and it’s loaded with Bifidobacterium species. It’s possible the GABA produced by these species has the calming effect needed by those with depression and especially anxiety.

The article also has a separate category for histamine, despite it not being one of the “Big 4” neurotransmitters.

And, sure enough, the list contains a few bacteria species that other sources have mentioned aren’t ideal if you have histamine intolerance or amine issues, such as Streptococcus thermophiles and Lactococcus lactis. However, the list also includes Lactobacillus plantarum, which I’d heard was beneficial.

The fourth and fifth articles in this series will explore the bacteria species that are beneficial and potentially problematic for the tyramine sensitive and histamine sensitive, respectively.

I’ll spend more time discussing tyramine specifically in the next article, but I did find some papers that discuss it. For example, certain Enterococcus and Lactobacillus species are responsible for producing tyramine in the food fermentation process.

This is why probiotics that contain these specific Lactobacillus species are on the “No” list for those dealing with amine intolerance. (And also why amine sensitive people need to avoid fermented foods.)

Also, this 2021 paper did mention that Staphylococcus and Providencia species produce tyramine, and, interestingly, that Lactobacillus plantarum (common in many probiotics) produces glutamate, the compound found in MSG and many other flavor enhancers.

More to come in the next articles in the series.

What about you? Have you had any bad (or good) reactions to probiotics? Let us know.

Tyramine Intolerance and The Gut Series

3 thoughts on “Tyramine Intolerance and The Gut III: Neurotransmitters”