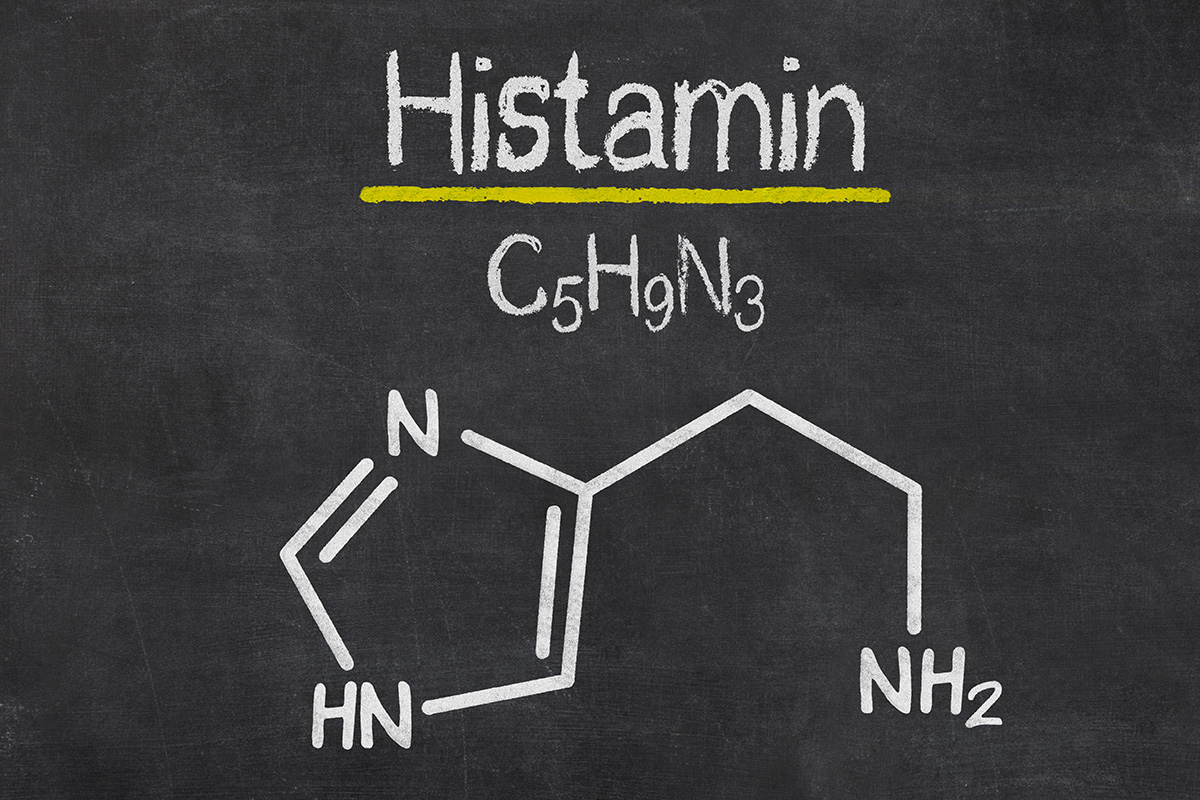 Some time ago, I published an article on tyramine intolerance because so little is known about it. And… because I’m intolerant to tyramines. But tyramine isn’t the only “amine” that causes problems for some people.

Many major medical websites have pages on histamine intolerance now. Believe me, they didn’t exist back in 2011, when I was figuring stuff out.

However, these two things have a lot in common, enough to make it difficult to know which one you have.

First, let’s start with the basics.

What are Histamine and Tyramine?

Histamine and tyramine are the best known of the “biogenic amines.” This means they’re substances that occur naturally in our food and/or bodies, and whose chemical structure contains an amine group.

Tyramine results from the breakdown of tyrosine, an amino acid. It elevates blood pressure and increases constriction of blood vessels, which can cause hypertensive crisis and/or migraines in susceptible people.

People who take monoamine oxidase inhibitors (MAOIs), a type of antidepressant, have to avoid high-tyramine foods. Why is this? These drugs block the enzyme that breaks down tyramine in the body, monoamine oxidase, allowing tyramine to build up and cause unpleasant and even dangerous symptoms.

However, some people (me included) don’t take MAOIs but still have a difficult time breaking down tyramine, due at least in part to slow enzyme activity. Genes play a role in how efficiently our enzymes work, which is one reason why people tolerate foods (and drugs) differently.

Aged and fermented foods such as cheese, deli meats, kimchi, and beer/wine contain high amounts of tyramine. So do slow-cooked foods or old leftovers.

Histamine, on the other hand, results from the breakdown of a different amino acid: histidine.

Aged and fermented foods also contain high amounts of histamine. So do many other foods, such as tomatoes, citrus fruits, eggplant, and spinach, to name a few. Finally, as with tyramine, slow-cooking and leftovers build up histamines.

However, unlike tyramine, which is found in trace amounts in the body, histamine can be found in most of the body’s tissues. It plays an important role in your immune response, and gets released when an allergen or other trigger enters your body, with the goal of fighting off the offender. This is why people with hay fever get symptoms when they breathe in pollen, and why they take antihistamines to help with those symptoms.

When you get swelling, itching, hives, sniffling, sneezing, and watery eyes, that’s histamine doing its job. Histamine even contributes to anaphylactic reactions.

Histamine is stored in mast cells in your skin, lungs, nose, mouth, gut, and blood. When a trigger happens, the mast cells release the histamine, causing inflammation and signaling your immune system to get to work.

If you consume foods high in histamine and/or tyramine and react badly, you may have intolerance to one or both compounds. The two share many foods in common.

If you consume high-tyramine foods and get the common symptoms — high blood pressure, headache/migraine, rapid heart rate, chest pain, or shortness of breath — you probably have tyramine intolerance. The only way to know for sure is to keep a food log.

Once you suspect you have it, avoid those foods as much as possible. If you start to feel better, you have your answer.

Tyramine intolerance results from one of two causes: taking MAOIs, or a reduced ability to break down tyramine efficiently. And breaking down any substance in our bodies requires enzymes—in the case of tyramine, monoamine oxidase.

Genes play a role in how enzymes work. If you have genes that code for a slow-moving enzyme, and you eat more tyramine than your body can break down within a given period, you will get symptoms. However, the genes you inherited are not the only factor here, as many things influence how genes get expressed. Also, most people with tyramine intolerance develop it when they’re well into adulthood; the genes didn’t change, something else did.

There’s clearly more to understand with what causes tyramine intolerance, and what we know is limited. But at least we’re clear on what it is and how to treat it.

Unlike tyramine intolerance, which has a pretty predictable list of symptoms, symptoms of HIT can vary greatly and affect many areas of the body, such as:

However, after following this issue for many years and spending time in HIT groups, I’ve found there seems to be two types of histamine intolerance:

Number 1 functions much like tyramine intolerance—you eat too much of the wrong foods, your body can’t break down the histamine quickly enough and you develop symptoms. Instead of the MAO enzyme, histamine gets broken down by two enzymes: diamine oxidase (DAO) and histamine N-methyltransferase (HNMT).

Number 2, however, functions less like “intolerance” and more like allergy. A food intolerance differs from food allergy, which involves the immune system. Also, #2 gets triggered not just by food, but other things such as heat, exercise, and or certain chemicals.

MCAS is a condition that causes mast cells to release too much histamine, causing all sorts of symptoms. Mast cells are an important part of your immune system, but in some people they go overboard. The cause of MCAS is unknown.

Many people in group #2 have MCAS, which can prove severe enough to trigger tightened airways and even anaphylaxis.

In my opinion, #1 and #2 are different things. However, for now, they get lumped under the “histamine intolerance” umbrella.

So, rather than turning this article into a book, I will defer to Dr. Becky Campbell’s book, The 4-Phase Histamine Reset Plan1. She lists 8 different causes for histamine intolerance:

I don’t agree with everything Dr. Campbell says in her book. For example, gluten isn’t “inflammatory” or a problem for everybody. However, I think the book is good overall, thorough, and offers some sound advice. These 8 potential causes of HIT are a useful place to begin.

How To Tell the Difference Between Tyramine Intolerance and HIT

It’s tricky. Foods high in tyramine are typically high in histamine too, so it can be difficult to tell.

One way is to examine your symptoms. Tyramine intolerance typically results in severe headaches and cardiovascular symptoms such as palpitations and elevated blood pressure. If you have other symptoms (skin, gut, etc), it’s probably not tyramine.

Another way is to test foods high in histamine but not tyramine, such as fresh tomatoes, citrus, eggplant, or spinach. If you react to them, you may have HIT.

That’s all for now.

If you have tyramine or histamine intolerance, let us know your experience. We learn from each other.

Also, my Tyramine Intolerance Handbook is now available on all platforms! In it, I go into detail about TI and offer detailed food lists, recipe ideas, and more.

1This site uses affiliate links, which means the Rogue Scientist may get a commission if you purchase a product through a link. There is no cost to you.